Ill Be Back in the Evening: The Life of a Burmese Dissidents Mother 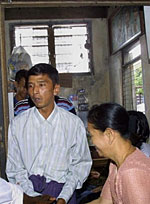 Daw Hla Kyi is the mother of Min Ko Naing, a prominent student leader of the 1988 Burmese pro-democracy movement who served a total of 18 years in prison before his release in 2004/ Min Ko Naing was detained again by Burma’s military government on Sept. 27, 2006. In this interview with RFA’s Burmese service, broadcast on Oct. 16, 2006, Daw Hla Kyi discussed her role as the mother of one of the country’s prisoners of conscience:

“He said, ‘Mother, they’re here to take me away. I’ll be gone for a short time. I’ll come back in the evening.’ And so, when I looked at him, his hair was messy, so I said, ‘Son, put some coconut oil in your hair.’ I put some coconut oil and combed his hair neatly. He said, ‘Mother, don’t be worried. I’ll be back in the evening.’”

“I still thought he would be back the next day. It was because they sent someone to bring his clothes that night. ‘Please send a set of clothing for him,’ they said. Since they took a pair of pants, a shirt, a towel, toothbrush and toothpaste, I thought he’d be back in the morning. When he didn’t return the next day...I was like a nursing mother who just wants to watch the face of the infant non-stop.”

“Since my son was in the seventh grade, I have sent all of my children to the Wipatthana Meditation Center in turn. And so they understand the Dharma of the Lord Buddha. I ingrained it in them. Also, he is a very gentle person by nature. That’s why he knows the difference between right and wrong. That’s why I believe that he would not engage in a wrong deed. I fully believe that. Since birth, everyone has to face the eight facts of life. And now, too, I believe that we are just facing the facts of life.”

“Even though my little son is not here at home, I just picture in my mind that he is sitting and paying homage to his parents, and I pray that my little son will be healthy and happy, and I send him my love. And also, since my son is a self-sacrificing person who does not work for himself but for other people, I pray that he will be a good and noble man on whom others can rely. Similarly, families that are suffering like I am have sons who are away from the shelter of their parents. I pray that these sons will be back in the arms of their parents as soon as possible.”

“He is very considerate toward his parents. Since he’s a sensitive person, he never talks about his work because he’s worried that his parents might become sad. Even for his health, when he is not feeling well, he keeps it inside and tries to keep his parents happy. I believe that my son is a very honest, innocent, and righteous person.”

Original reporting in Burmese by May Pyone Aung. Translated by Than Than Win. Produced for the Web in English by Luisetta Mudie. Edited by Sarah Jackson-Han.

Women in Their Own Words