In a mysterious twist to a widening case, Cambodian authorities have arrested a security guard at a logging company for alleged involvement in the murders of an environmental activist and military police officer, a rights group said Wednesday, calling him the “real killer.”

LICADHO senior investigator Am Sam Ath said the move was meant to protect the “real killer.”

“The preliminary investigation result wanted to show that the victim was killed and that the killer was also killed, so that the case would be closed,” he said, pointing out that it is very difficult for anyone to conceal the truth behind a killing.

Provincial military police chief Tong Narung refused to comment about the arrest of Rann Borath, who is also the son of another employee at Timber Green, but said his officers were working to collect more evidence and interview additional witnesses from the crime scene.

He said that the committee had not finished its work yet.

The director of the Ministry of Interior’s judicial department Mok Chito, who is leading the joint investigation committee, also refused to comment about the case. But officials from LICADHO told RFA that Mok Chito had led a team to Koh Kong on April 30.

The investigation committee is said to comprise units from the military police, the Ministry of Inspection, the General Commissioner of the National Police, and the government’s Press and Quick Reaction Unit.

Military police officials had earlier said that Chut Wutty was gunned down by In Rattana, who allegedly committed suicide by shooting himself in the chest and stomach with his own AK-47 rifle on seeing Chut Wutty dead.

The same official had previously given reporters contradictory statements about how In Rattana died, including that he had been shot by Chut Wutty.

He had also said earlier that In Rattana had been killed by his own bullet that ricocheted off of the car driven by Chut Wutty as the military police officer gunned down the activist.

The statements have prompted national outcry over the most high-profile death of a Cambodian activist since the assassination of labor activist Chea Vichea in 2004. His killers have never been found. 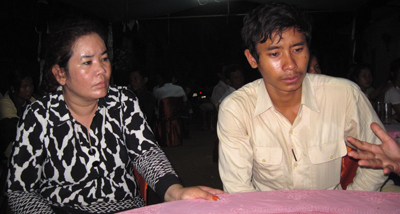 Interviewed at her home during the ongoing seven-day funeral for the slain environmentalist, Chut Wutty’s widow, Sam Chanthy, expressed hope that the authorities would find her late-husband’s killer, provided they are sincere about doing so.

“I believe the government is the country’s leader, and the killing happened in this country, so the government must be responsible [for finding the killer],” he said.

And Chut Wutty’s son, Chhoeuy Odomraksmey, told RFA that he would do his best to fill his father’s shoes.

“I am committed to his work,” he said, adding that both he and his mother have a passion for the protection of nature.

Chhoeuy Odomraksmey called on the country’s nongovernmental organizations to help educate him on how he can pursue his father’s goals.

“My father left a lot of documents through which I can study to become like him,” he said.

Chut Wutty was president of Cambodia’s Natural Resources Conservation Group, whose activists had been conducting constant "patrols" in the heart of the Prey Lang forest to check illegal logging and other activities in a bid to protect the sprawling 3,600-square kilometer (1,400-square mile) forest area.

The second plot has been set up to fade the incident likes Plastic Killer in Chea Vichea case!!!!!