U.S. President Barack Obama said after a meeting with Myanmar’s de facto leader Aung San Suu Kyi on Wednesday that he is prepared to lift economic sanctions against Myanmar “soon” to boost trade and investment with the Southeast Asian nation.

“In part because of the progress that we’ve seen over the last several months, I indicated, after consulting with Daw [honorific] Suu, that the United States is now prepared to lift sanctions that we have imposed on Burma for quite some time,” Obama said in remarks after the meeting at the White House. “It is the right thing to do in order to ensure that the people of Burma see rewards from a new way of doing business and a new government.”

Obama did not specify a particular date on which the removal of remaining sanctions would take place, only saying “soon” in response to a question.

The move is intended to provide incentives to American companies to invest in the country, formerly known as Burma.

The U.S. has more than 100 individuals and organizations in Myanmar on its official blacklist of companies prohibited from doing business with the U.S. Many of these entities have ties to the country’s former military junta, have been cited for their involvement in drug trafficking or money laundering, and trade in gemstones.

Despite the lifting of sanctions, several restrictions will remain in place, according to a U.S. State Department press release. They include a visa ban barring some former and current members of Myanmar's military from traveling to the U.S. and limitations on foreign assistance to the military.

The U.S. will also restore Generalized System of Preferences (GSP) trade benefits to Myanmar to boost its commercial and trading advantages, Obama said.

When Myanmar joins the GSP program in November, it will be exempt from duties on more than 5,000 product lines.

“The United States Congress has been more than friendly towards our efforts towards democratic reform, and over the years, they have done many things for us,” said Aung San Suu Kyi, who is on her first official visit to Washington after her National League for Democracy (NLD) party won general elections last November. “And as we all know, sanctions have been one of the many steps they took in order to push democratic reforms in our country.

“We think that the time has now come to remove all the sanctions that hurt us economically, because our country is in a position to open up to those who are interested in taking part in our economic enterprises,” she said.

At their meeting in the White House, the leaders of the two countries agreed to form a bilateral partnership with annual dialogues, and the U.S. pledged to provide support for the Southeast Asian nation’s democratic and economic development.

The U.S. also said it will extend a loan guarantee with local microfinance institutions in Myanmar to provide more than $10 million in loans to small businesses there.

“This action would remove the single biggest obstacle to U.S. companies engaging in Myanmar and allow U.S. companies to compete on a level playing field with competitors from Europe, Asia, and elsewhere,” said Alexander Feldman, the organization’s president and chief executive officer, in a press release.

Myra Dahgaypaw, acting executive director of the Washington-based U.S. Campaign for Burma, called the lifting of sanctions "shocking" and “atrocious.”

“By lifting the sanctions on Burma, the military and their companies, the U.S. will now be complicit in their ongoing atrocities,” she said.

Because the sanctions specifically target certain companies, cronies, and military officials, they create a bargaining chip for government leaders to use to get what they need from the Myanmar military, she said.

Nearly 50 civil society organizations sent a letter to Obama dated Sept. 12 urging him to maintain U.S.  sanctions against Myanmar because of the plight of the persecuted Muslim Rohingya minority group in western Myanmar’s Rakhine state and human rights abuses committed by the country’s powerful military.

“While incremental progress is being made in Burma, it is vital that the U.S. continue to act in support of Burma’s people, particularly those still suffering under the current government,” their statement said. “To lift sanctions prior to tangible change for suffering communities would be a disservice to those vulnerable peoples who deserve international protection.”

The 46 organizations specifically say the U.S. should maintain sanctions until the Myanmar army stops violating international humanitarian law, and the government addresses the lack of citizenship for the Rohingya and offers them protections from persecution. They also want the sanction to be kept in place until the government makes progress in peace talks, properly manages natural resource extractions, and reforms the current constitution drawn up by the former military junta that ruled the country.

In May, the U.S. eased some of its economic sanctions against Myanmar to promote the Asian nation’s economic growth and political reform under the new, reform-minded government.

Washington also removed seven state-owned enterprises and three state-owned banks from its official blacklist and extended a measure to allow shipments to go through ports and airports in Myanmar, hoping to open up opportunities for trade and for more American companies to invest in the country. 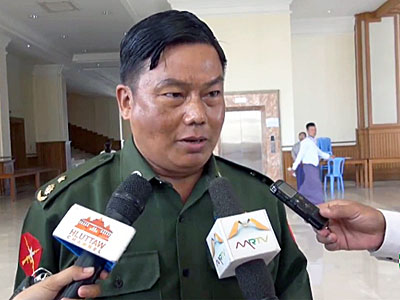 Though Aung San Suu Kyi has made headway with reform, overseeing the release of political prisoners and organizing a major peace conference initiative since the NLD came to power in April, she still faces pressure back home six months into the transition.

Lawmakers from the opposition military-backed Union Solidarity and Development Party (USDP) and military members of parliament on Wednesday debated a proposal introduced last week to dismantle the country’s notorious Emergency Provisions Act of 1950, which has been used to arrest activists and jail dissidents.

Under the act, death penalties and life sentences in prison can be given to those who commit treason or sabotage against military organizations, Shorter prison terms can be meted out for a broad range of other offenses against the state, such as spreading false news, economic sabotage, and disrupting the country’s security.

A group of eight lawmakers, including three from the NLD, two military officers, two from the USDP, and an independent, participated in the discussion of the draft law.

“This Emergency Provisions Act is not suitable for the current situation anymore and is unfair,” said NLD lawmaker Myat Thida Tun. “During all previous governments’ terms, people felt that this act didn’t protect them, but rather oppressed them. I support the abolishment of this act because it can harm trust-building between ethnic groups and the government.”

Aung San Suu Kyi has led the country’s efforts to reconcile armed ethnic groups and the Myanmar army which they have been fighting for decades so the country can achieve lasting peace and proceed with its political and democratic development.

Those who support keeping the law on the books, however, say the measure is necessary to prevent chaos and ensure stability in the country.

“This law mainly protects the state’s and citizens’ interests,” said military lawmaker Lieutenant Colonel Zaw Moe. “If it is abolished, it would be dangerous.”

Independent lawmaker Soe Thein, a former minister of the President’s Office, suggested that a decision should be made only after further discussion of the act by experts.

“This act should be abolished only after discussing its advantages and disadvantages with experts,” he said. “Making a law is very easy, but abolishing it is very difficult.”

If there is disagreement between upper and lower houses over the draft law, lawmakers will take up the issue and decide it during a parliamentary session.

In May 2015, Myanmar’s lower house of parliament rejected a proposal by Aung San Suu Kyi’s NLD—then the main opposition party—to revoke the controversial law. The NLD has said that the law is used to curb political activity and instill fear in people.

The latest move is the third unsuccessful attempt by lawmakers to repeal or change the law since the beginning of the country’s reform period in 2011.

Another problematic area for Aung San Suu Kyi is the approval on Wednesday of a proposal by the Rakhine state parliament to dismiss the newly appointed Rakhine advisory commission.

Much of the commission’s work is expected to focus on the plight of the 1.1 million stateless, Muslim Rohingya people living in Rakhine. Many Burmese refer to the Rohingya as “Bengalis” because they consider them illegal immigrants from neighboring Bangladesh. The country’s Buddhist majority has long subjected the Rohingya to persecution and attacks and denied them basic rights, including citizenship.

Lawmakers from the Arakan National Party (ANP)—which heavily objects to the presence of three foreigners, including Annan, on the commission—the USDP, and the military supported the proposal and discussed standing behind the Buddhist majority in Rakhine in light of the government’s efforts at national reconciliation.

“The U.N. and international organizations never speak any sympathetic words about the ethnic Rakhine people,” said lawmaker Aung Than Tin. “That’s why we, the Rakhine people, don’t trust this commission.”

When commission members visited Rakhine’s capital Sittwe last week, they were met by Buddhist protesters who, along with ANP members, believe that the three foreigners will side with the Rohingya and will turn the issue into an international one. The commission’s six other members are Myanmar citizens.

During its two-day visit to Rakhine, the commission members met with senior monks, members of the Rakhine state parliament, representatives of political parties, and local cabinet members, and visited the Rohingya living in displaced persons camps.

The minority group, which bore the brunt of anti-Muslim communal violence in 2012 that left more than 200 dead and displaced tens of thousands, were later forced to live in camps where they remain today.

“Because this issue can harm state security and citizens’ interests, it should be controlled through careful discussions with members of parliament,” said lawmaker Lieutenant Colonel Min Oo. “It is important for the Rakhine people to accept it because it is very sensitive issue for them.”

Myanmar has at least been moving in the direction of democracy, constitutionalism, and rule of law, while mainland China and North Korea have recently kept moving in the other direction toward even more autocratic and lawless systems.

Jaguar Poaching Driven by Chinese Demand for Teeth and Parts