The appeal by two former Radio Free Asia (RFA) journalists to drop the reinvestigation into espionage charges laid against them was rejected by Cambodia’s Appeals Court today.

The new collection contains 60 of the cartoonist’s recent illustrations, caricatures, and cartoons.

Radio Free Asia’s (RFA) board of directors has appointed Bay Fang as the company’s new President.

The awards were established in 2015 to recognize brave journalists, politicians, and activists for human rights-related work.

Statement of Libby Liu, President of Radio Free Asia, on Anniversary of Arrest of Ex-RFA Journalists in Cambodia

Radio Free Asia President Libby Liu today issued the following statement on the two-year anniversary of the arrest of Uon Chhin and Yeang Sothearin, two former RFA journalists in Cambodia, who still face charges, including “espionage,” in connection with their work for RFA.

RFA Executive Editor Bay Fang issued the following statement about the release of former Burmese child soldier Aung Ko Htway, who was arrested, charged, and sentenced to prison in 2017 for comments made to RFA about his past experiences.

Statement on the Charges Against Former RFA Journalists in Cambodia

RFA considers the charges brought against Uon Chhin and Yeang Sothearin to be unsubstantiated and would like to issue the following statement.

The Mandarin and Korean Services both earned distinctions in the news features category.

As journalists and news groups around the world mark World Press Freedom Day, Radio Free Asia’s President noted the serious challenges and threats the organization and its contributors face.

‘Behind the Walls’ Describes Re-education Camps through Firsthand Accounts

Statement on Release of Former RFA Journalists in Cambodia

Statement of RFA President on the Passing of Dick Richter, RFA's Founding President

The 2018 winner for best website in the category for interactive news media, explores the long persecution of the Rohingya Muslim minority in Myanmar through graphics, videos, key quotes, and current news.

A Year ‘Like No Other’: RFA President Decries ‘Unprecedented’ Crackdown on Independent Voices in Asia 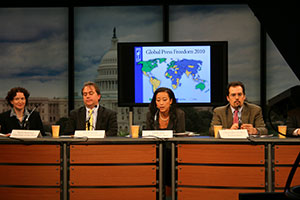 President Libby Liu moderates a discussion panel on press freedoms and open access at the Newseum in Washington, DC.

RFA in the News

More RFA in the News …