Under a stimulus plan outlined by Premier Li Keqiang in March, the government has allowed enterprises to reduce their social security contribution rates to 16 percent of workers' wages from 20 percent previously, starting May 1.

The break, intended to ease "corporate burdens," is a significant part of the government's 2-trillion-yuan (U.S. $283-billion) tax-cutting program aimed at promoting economic growth, which slowed to 6.2 percent in the second quarter this year.

By the end of the first half, employers had already saved 128.8 billion yuan (U.S. $18.2 billion) in payments for basic pensions, unemployment insurance and work-related injury coverage, the official Xinhua news agency reported.

Corporate savings are expected to rise to at least 310 billion yuan (U.S. $44 billion) by the end of 2019, said You Jun, vice minister for human resources and social security.

But despite the benefits from bucking up corporate profits, the government arguably could not have picked a worse time to cut contribution rates.

According to Xinhua, China is "attempting to walk a fine line" between boosting the economy and keeping the pension system sustainable.

The problem is that pensions are already underfunded as China struggles with the effects of an ageing population and demographic shifts.

At the end of 2018, China's over-60 population stood at 249 million, or 17.9 percent of the total, while older citizens are living longer. In Beijing, the average life expectancy among women has risen to 84.63 years, up by over 12 years since 1979, Beijing Youth Daily reported last month.

The figures have sparked fears among younger workers that there will be no benefits for them when they reach retirement age, the Nikkei Asian Financial Review said. The government raised basic pension payments by 5 percent this year.

By the end of June, the total pension insurance surplus was over 5 trillion yuan (U.S. $708 billion), the official English-language China Daily reported, citing figures presented by You. The system was "generally stable," You said.

The surplus was enough to cover more than 18 months of payments, Reuters quoted You as saying.

But in April, a report by the Chinese Academy for Social Sciences (CASS) projected that pension funds for urban workers would start running deficits in 2028 and become insolvent by 2035.

In July 2018, pension payments were delayed by underfunding in northern China's Heilongjiang province despite an injection of subsidies, according to a Council on Foreign Relations (CFR) report published by the online international news magazine The Diplomat in March.

The CASS report warned that Qinghai, Liaoning and Jilin provinces would also run out of pension funds this year.

The government's solution, first announced in 2017 as a pilot program, is to transfer 10-percent shares in state-owned enterprises (SOEs) to the social security funds.

The value of the completed and expected transfers from 59 large and medium-sized SOEs will be 660 billion yuan (U.S. $93.5 billion), the Ministry of Finance said.

You voiced "confidence" that the scheme would achieve the two "guarantees" that enterprises would get their social security contribution cuts and that pensions "would be paid on time and in full."

But others see a slew of problems with the complicated footwork.

"Quite some financial gymnastics," said Gary Hufbauer, a nonresident senior fellow at the Peterson Institute for International Economics in Washington.

The reshuffling of equity interests may not dilute the government's control over SOEs, which would only be held in different official pockets.

But the estimated value of the stakes is only a little more than twice the amount of the annual savings on pension contributions, raising the question of what the government would do for an encore after the funds are paid out.

Since there is little chance that the SOE shares would be sold, their real value to the pension system may be far less than the official estimate.

"SOE shares are clearly not liquid assets that the pension funds can sell in order to pay benefits," Hufbauer said.

"Maybe down the road the pension funds can borrow from the PBOC (People's Bank of China) against the shares to get cash."

"In any event, cutting the employer contribution as a stimulus measure was ill-advised. Cutting other taxes would make more sense," Hufbauer said. 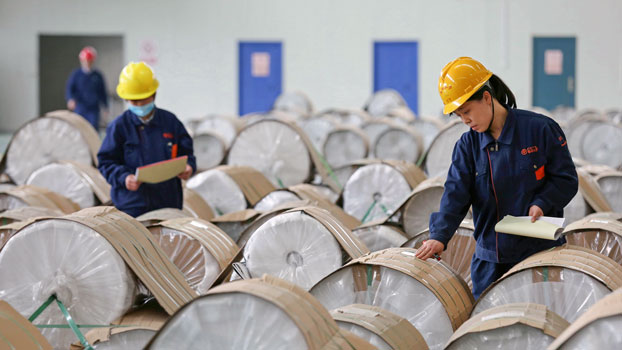 The pace of the share transfers has also been questioned.

SOEs have "dragged their feet" on fulfilling the government's plan, fearing that pension funds would want to influence management decisions, Nikkei said.

The central government has already been forced to replenish the pension fund, replacing about 80 percent of the amount lost due to lower corporate contributions.

You said the government made 528.5 billion yuan (U.S. $74.9 billion) in additional direct subsidies to the pension system in the first half of the year, increasing support by 9.4 percent, Reuters reported.

Pension underfunding is endemic, in part because enterprises have already found ways to avoid making their full contributions.

The shortcomings of using pension funds for stimulus purposes appear to be a sign of how strongly pressures are building on the government over slowing economic growth rates, now at their lowest quarterly level since 1992.

In an Emerging Markets Monitor report on July 19, Fitch Ratings Inc. said the government is soon likely to announce "concrete measures in an effort to boost demand, and in particular disposable incomes of rural and urban residents."

The forecast for more demand-side stimulus follows an assessment that supply-side measures have not done enough to stem the slide in gross domestic product growth.

The call for more stimulus comes at a sensitive time as external pressure on the government from tariffs appears to be taking its toll.

The report by Fitch Solutions argued that "maintaining stable growth in the upper half of its growth band target of 6.0-6.5 percent in 2019 is important to Beijing as it conducts trade negotiations with the U.S. and deals with political unrest in Hong Kong."

"From Beijing's point of view, a weak growth number would likely embolden Washington to take a tougher line in trade negotiations," while the appearance of economic stability under pressure would give China "a stronger position in talks."

A drop below the government's target limit would be a serious setback to the credibility of its policies that could risk breaking the Communist Party of China (CPC) pledge to double GDP in the decade since 2010.

That consequence still seems unlikely, given the government's ultimate control over official statistics. But the direction of China's economic drift may be a powerful motive for more impractical plans like the pension ploy.

Since pension systems are an intergenerational issue, they require a long-term perspective. With Asia's aging populations staying productive well into their 70s and even 80s, it is critical to improve the provision of adequate and sustainable retirement income and move the reliance off of public pension systems. Raising the retirement age, expanding the coverage of private pensions for workers and encouraging financial planning and early savings should be the focus of employers and policy makers