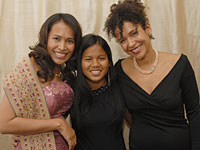 Mam Somaly runs an organization in Cambodia, Agir pour les Femmes en Situation Précaire (AFSP), that offers rehabilitation to the victims of rape, child-trafficking, and prostitution, as well as campaigning against the continuing trafficking in women and girls in the region. In October 2006 she was named a Glamour magazine Woman of the Year. Her award was presented by journalist Mariane Pearl, who reported on the retaliatory abduction of Mam Somaly’s daughter. She talked to reporter Naline Pea about her award, and the background to her work:

“It was like a dream...Last night I thought that I was in a different world. In the past, the work in Cambodia has been very difficult. Last night, we participated in the Hip Hop show, and we saw Hollywood stars, and there were big cars picking us up. I was very excited, very happy...”

“Our work is to fight against the trafficking of women and girls. Our work in Cambodia first is to help children in collaboration with the Cambodian government. Secondly, we provide lawyers and psychological help to all the women victims, and we have vocational training centers.”

There are many problems in the fight against trafficking: problems of corruption, problems with the attitudes of some Khmers. In the Khmer society, we give a very negative meaning to the word 'prostitute.' We do not think about the reasons behind it.

“The women receive training and go back into society or to their family after finishing the training. They are trained in hairdressing, wedding costumes, sewing, cooking, and then they return home. At the beginning, we support them 100 percent. Then we monitor their progress for up to three and four years until the girls have jobs.”

“There were many reasons [I won this award]. Firstly, it was my life experience. Secondly, the award is not only for me, but I would like to share my award with everybody who works and does not have a chance to receive an award. There are many women’s organizations that work to fight against the trafficking of women and girls.”

“We created the organization a long time ago—in 1994 or 1995, but at that time I worked alone...We received a medal from Spain in 1998. So far, our organization has helped more than 3,000 women and children victims. We sent them back into society. Now, they have jobs. Some have families, husbands, and children. Unfortunately, 40 percent of them died of HIV/AIDS. Others have gone missing.”

“There are more than 100 staff members. All of them are Khmers. We have two foreign volunteers. We would like Khmers to be in high positions. The international finance director is Khmer. We are proud of this. Our organization is based in 12 towns and provinces in Cambodia. We will organize branch offices in Vietnam, Laos, Thailand, Spain, and France.”

“There are many problems in the fight against trafficking: problems of corruption, problems with the attitudes of some Khmers. In the Khmer society, we give a very negative meaning to the word ‘prostitute.’ We do not think about the reasons behind it. We do not look at why a girl was raped. They say that it is because of her, that it’s her fault. Therefore, Khmer society needs to change its attitude.”

“It is not easy in my work, but I have the support of the Cambodian government... However, in working with the government, we come across good and bad people. We have encountered many problems, but we work well with the Women’s Affairs ministry, the police, and social affairs. We have problems working with the legal system. As we already know, laws in Cambodia are still loose, and corruption still exists.”

“The number [of trafficked women and girls] has increased, especially cross-country trafficking from Cambodia to Thailand, and from Thailand to Malaysia. The age of the victims is getting younger and younger. This is unfortunate. This is a tragedy.”

“They are between 12 and 18 years of age, over 10 years old. In some places, we have saved girls who are seven-years-old, five-years-old. This is a tragedy when you see a five- or six-year-old child whose face has been beaten and who has been raped. This is very tragic.”

“As for me, I almost stopped my work due to lack of funding sometimes, but I cannot stop working because I feel sorry for them. Why has our country become like this? Foreigners did this to our children, and why do Khmers treat Khmers so badly? ...I saw many women who were victimized by Khmers overseas.”

“We have a special center for young children, and we have caregivers’ help. However, for the victims, the problems remain in their hearts forever. They cannot erase that feeling. It is the same as living during the long Khmer Rouge regime. When we help them, we cannot help 100 percent. We have special centers for them to go for training. We are happy if they learn well.”

“The majority of Khmers are good in society, but some people are not. This weakens Khmer tradition. There are many tourists who come to Cambodia for sex. As for local Khmers, we need to work hard to explain to the women. I hope one day they will have dignity like people in other countries. I do not want to see women who are victims of trafficking. I do not want to see their tears. I would like to see men and women live in dignity.”

Please continue to send contributions to RFA’s Women In Their Own Words project to women@rfa.org