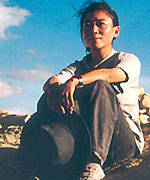 The Tibetan writer Woeser publishes primarily in Chinese but feels a strong attachment to her own ethnic Tibetan roots. Born in 1966 in Lhasa, Woeser is married to the Chinese writer Wang Lixiong and lives in Beijing. She is the author of 10 volumes, including one book of collected poems, a prose volume titled “Tibet Journal,” and two books on the 1966-76 Cultural Revolution. Most of her work is banned inside China. She was sacked in 2004 from the Tibetan Cultural Association in Lhasa, the Tibetan regional capital, after publishing “Tibet Journal,” which reported on Tibetans’ continuing reverence for the Dalai Lama, whom Chinese authorities regard as a “splittist” committed to Tibetan independence. She joined the RFA Tibetan service call-in program on Aug. 1, 2006, days after Chinese authorities closed down her blogs. The following are excerpts from her interview with RFA-Tibetan and from an essay she contributed to RFA-Mandarin :

“Though my blogs are shut down, they cannot stop my speech and my writing. I will be writing and speaking. Since I am writer in Chinese, I want to make more people know the reality of Tibetan culture, history, and traditions. I especially want the Chinese people to learn the truth about Tibetan history, culture, religion, and traditions. I think the main reason for shutting my blog was that I placed a photo of His Holiness [the Dalai Lama] in my blog. I also composed a poem wishing him long life on July 6, and offered a [butter] lamp. Chinese authorities don’t like such things.”

Though my blogs are shut down, they cannot stop my speech and my writing,

“I am making an impact on a variety of people… Most of those who surf my blog are of course members of the younger Tibetan generation, [and] intellectuals in Tibet, China, and other foreign countries…Those who participated in my blog from outside China could access through it English translations. There are many Chinese intellectuals—particularly those who are interested in Tibetan culture and history. There are also many photographers, and intellectuals from [the] Uyghur [region], Mongolia, Manchuria, and Taiwan. They write to me, and some of their writing, particular [that of] one Uyghur, was of a very interesting and excellent writing.”

Stayed behind for fans

“I love my [Tibetan] nationality and have faith in religion—I practice Buddhism. Early on, I knew nothing about religion. Then I started visiting monasteries and started worshipping but we didn’t have the freedom to practice. My faith in religion and love for Buddhism largely led me to write. When I was working in an office in Lhasa, I was paid well. But I never felt free, and it bothered me… When I was fired from the job, this incident led me to freedom, freedom to express myself in writing.”

I am a writer. One of the main ethics of a good writer is to present the truth. A good writer cannot be a liar,

“I was in Kham for 13 years. Then I lived for seven years in Chengdu, studying Chinese literature. When I graduated from Chengdu, I loved poetry and started writing poems…”

“Tibetans living in this transformative period are also divided into old and new. The old is unwanted; the new is required. How much effort is required to transform, repackage, and even change the ethics of an old people into a new people? Does it also imply how to grieve and fall to pieces? For many years, the Party’s literary and art workers have, in this dramatized way, revised Tibet, re-painted Tibet, re-sung Tibet, re-danced Tibet, re-filmed Tibet, re-sculpted Tibet. Actual history was changed in this image, colored by red ideology. The memories of generations of Tibetans were changed….”

Original reporting by RFA's Tibetan service. Tibetan service director: Jigme Ngapo. Produced for the Web in English by Sarah Jackson-Han. Please continue to send contributions to RFA's Women in Their Own Words project to this address: women@rfa.org.

Women in their Own Words

China's Economy Expected to Shrink in The First Half