Hundreds of Cambodian activists and villagers protested outside the Australian Embassy in Phnom Penh Friday against an agreement allowing Canberra to resettle refugees in their impoverished Southeast Asian nation and which has been criticized by the U.N. refugee agency and human rights activists.

Rights and land activists clashed with police outside the embassy and pushed barricades to try to submit petitions in protest of the agreement signed Friday allowing Australia to relocate refugees from the tiny Pacific island of Nauru to Cambodia, where they would settle permanently.

The agreement, under which Australia will pay Cambodia U.S. $35 million in aid for the resettlement program, was signed by Cambodia's Interior Minister Sar Kheng and Australian Immigration Minister Scott Morrison.

Following the confrontation, embassy staff permitted four of the protestors to hand over the petitions to them.

“However, I don’t think that Australia will end [the deal]. I hope that the country will suspend the deal,” he said.

The refugees would not achieve a better living standard or receive a better education in Cambodia, he said.

As protestors confronted police outside the embassy, villagers marched with large banners opposing the deal, which cited Cambodia’s own impoverishment and inability to accommodate the refugees.

The Australian government should be aware that Cambodia is a poor country and lacks human rights and employment opportunities and faces corruption, the villagers said. 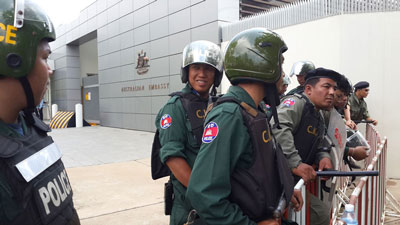 Meanwhile, nongovernmental organizations and the opposition Cambodian National Rescue Party (CNRP) expressed disappointment that Sar Kheng and Morrison provided no further information about the resettlement of the refugees in Cambodia.

Neither agreed to talk to reporters after they signed the agreement, although Morrison talked to individual news groups.

A joint statement issued during the signing ceremony said the agreement would offer refugees resettlement in Cambodia on a voluntary basis and in conformity with the United Nations Refugee Convention of which Cambodia is a signatory.

The statement went on to say that Cambodia would determine the number and timing of refugee settlements, while Australia would cover direct costs, including initial support to refugees and resources for Cambodia to ensure it could handle the refugees.

Morrison had told the Australian Broadcasting Corp. that his country would pay Cambodia U.S. $35 million over four years plus the costs of resettlement.

The office of the United Nations High Commissioner for Refugees expressed “deep concern” over the agreement.

“This is a worrying departure from international norms,” said Antonio Guterres, the U.N. High Commissioner for Refugees.

“We are seeing record forced displacement globally, with 87 percent now being hosted in developing countries. It’s crucial that countries do not shift their refugee responsibilities elsewhere.”

London-based rights group Amnesty International also condemned the agreement, referring to it as a “new low in Australia’s deplorable and inhumane treatment of asylum seekers.”

It went on to say that there has been no opportunity for civil society to participate in the discussions or raise objections to them on the basis of international human rights standards.

Suon Bunsak, chief of the Cambodian Human Rights Action Committee (CHRAC) secretariat, said details of the deal have to made public.

“The two governments should be more transparent,” he said.

But Morrison told Reuters that the time frame, details on the number of refugees, and where they would be resettled had yet to be determined along with information on health care, language training, and insurance.

He also said the number of those transferred to Cambodia would not be limited, and so far 200 people had been identified as refugees.

Son Chhay, a CNRP lawmaker who opposed the agreement, said Cambodians didn’t want their country to become a "trash bin" for refugees.

He pointed out that while Cambodia has agreed to accept refugees, it has failed to honor its United Nations obligation to respect human rights.

He hoped the two governments would review the agreement.

“The signing of the MOU is not the final agreement yet, and it can be changed,” he said.

LOL...All they want is a free sumptuous lunch in Australia. They just jump on the boat, sail to Australia and shout "Here we are!" and let the Aussies pay and feed. LOL...

Why didn't Malaysia and Indonesia take these refugee deal? Because they were smart. This is another example why Cambodia is dumb. Because it has a dumb leader like Hun Sen

Jaguar Poaching Driven by Chinese Demand for Teeth and Parts