Holdout in ‘Fight to Death’

The owner of a shack in eastern China vows to stave off developers.
2009-11-12
Tweet

HONG KONG—A homeowner in eastern China has rejected a developer’s offer of compensation and says he is prepared to fight to the death to protect his property.

The homeowner, surnamed Wang, and four family members have inhabited a small shack in the Lanshan district of Shandong province’s Linyi city for two years.

But a developer given permission by the local government to build villas on the land has asked for assistance from authorities to remove the Wang family to continue its construction project.

Recently, Wang said, he received an “ultimatum” signed by the Linyi deputy mayor, accusing the family of “maliciously obstructing” the construction and threatening him with removal by force.

Wang said he has poles and an ax handy and has vowed to protect his property with his life.

“I have read their notice. They accused me of obstructing their project. The developer also requested assistance from the local police force to carry on the second stage of the villa project,” Wang said.

“We are not ‘maliciously obstructing’ their project. We are only holding on to our own property,” he said.

Wang said he holds the official deed to the property, but that the local government has ignored his legal rights.

“The local government only stands on the side of the developer … This ultimatum is a warning shot. I assume they will take action sometime this week. I am prepared to sacrifice my life to protect my legal rights,” Wang said.

A banner hung on the front of his home reads: “We will protect our lawful use of this land with our own life and blood.”

In October 2007, the Linyi government declared Wang’s original home illegal and demolished it, although he holds the official title for the land and a certificate for the house.

Earlier, Wang had been the only holdout among his neighbors to reject an offer from the developer of 30,000 yuan (U.S. $4,400) in compensation for relocating his family, saying the money was inadequate to purchase another home.

Wang filed a law suit through the local court, but his case was rejected.

Following the demolition, Wang refused to leave his property and instead built a shack using leftover construction materials.

The developer bulldozed the land around his new home, leaving it perched on a mountain of dirt.

These so-called “nail houses” have become commonplace in China as residents attempt to hold out against local governments and developers in land disputes.

Wang and his family members have lived in the shack cut off from a water supply and electricity since, and rely on a nearby river and firewood to live.

Wang’s three children work at various day jobs, while he and his wife occasionally scavenge to make ends meet.

“I built my own house on my own home site and I cannot accept the accusation that my house is an illegal building,” Wang said.

“I would be satisfied if I was compensated with an equal number of houses,” he said.

Wang said he was angered largely by the Linyi government, which demolished his home without even discussing the situation with him.

“The developer was caught in the middle of this dispute. They say that they understand my situation. In the meantime, my shack has become an ‘island’ surrounded by trenches with no water or electricity,” he said. 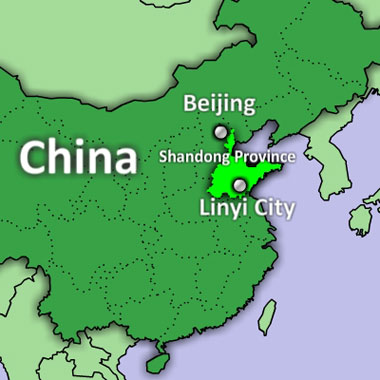 A map showing Linyi city in China's eastern Shandong province. Credit: RFA RFA
The villa project has reportedly relocated more than 2,000 households in an area of 400-500 mu (about 100 acres).

The developer previously informed residents that relocation compensation is fixed at 150 yuan (U.S. $22) per square meter with no room for negotiation.

They were also told that their land would be developed for public usage, but later were told that luxury villas would be constructed there.

A former resident surnamed Liu, whose home was demolished two years ago, said she felt cheated out of her home but that her chances for legal recompense were slim.

“They used the public cause as a shield to conduct commercial development. The fact of the matter is that our houses were torn down while we still hold our property titles and other legal documents,” Liu said.

Liu said families who disputed the relocation order and tried to block the demolition were met with violence.

She said that for families like the Wangs that try to hold out against developers and the government, life becomes extremely difficult.

“They had no choice but to build a shack on their own home site. New buildings have emerged in the surrounding area and now trenches have been dug up to their door step. Their shack will likely be leveled in a matter of days, perhaps through violence again,” Liu said.

“He won’t have any advantage if he resists. Previous property owners were attacked after they tried to hold on their land.”

China sees thousands of incidents of popular unrest across the country annually, many of which are over the demolition of people’s homes or the appropriation of their farmland by local officials keen to cash in on booming property prices.

The Chinese parliament, the National People’s Congress (NPC), passed a law in 2007 setting out plans for a nationwide property registration process, in which the rights of individual, collective, and State ownership would be specified for all existing property in the country.

Article 66 states: “The legitimate properties of individuals shall be protected by law and shall not be occupied and damaged by any institution and individual.”

The law also provides for litigation and compensation in cases where property rights have been infringed.

This is the overwhelming communist policy to choke off people' welfare. They care only their profit not care about people at all.

Selection of news in English