Trade is booming between China and North Korea and much of it is driven by a link between two northeastern cities.
2012-10-29
Tweet

North Korean fishermen wait for their boat to be unloaded at Najin port in Rason city, Sept. 2, 2011.
AFP

The rapid development of a link between two border cities in China and North Korea is fueling an unprecedented level of bilateral trade and helping to provide China with a key domestic trade window.

According to recent reports by China’s state media, the number of people passing through the Chuanhu customs checkpoint between Hunchun, a county-level city in China’s Yanbian Korean Autonomous Prefecture in Jilin province, and North Korea’s Rason city, in North Hamgyong province has surged.

Some 250,417 people traveled through the checkpoint in the first nine months of 2012, up 30.7 percent from the same period last year, China’s official Yanbian Daily said.

It also noted a significant increase in the volume of cargo passing through the checkpoint from a year ago amid bustling ties between the Hunchun and Rason cities separated by the Tumen River which straddles the borders of China, North Korea and Russia.

Trade volume between the two nations reached U.S $5.67 billion in 2011, up 62.4 percent from the previous year. Both the volume and growth rate were at historical highs, based on data provided by China’s General Administration of Customs, according to Chinese weekly The Economic Observer.   Bilateral trade in this first half of 2012 was $3.14 billion, up 24.7 percent from the same period last year, it said.

Sinuiju is one of North Korea’s most important light industrial centers and is home to a plant manufacturing enameled ironware, a textile mill, paper mill and an afforestation factory.

But much of the recent trade growth is being promoted through China’s rapid development of Rason city, designated by the North Korean authorities a “Special District” in 2010 and administered separately from the rest of North Hamgyong province.

China, which lacks a port in its northeastern region, has recently made significant investments in Rason’s infrastructure—including the city’s roads and electrical grid—to gain access to northeastern North Korea's Najin Harbor, which is on the Pacific Ocean and remains ice-free throughout the year.

Beijing now uses the harbor, which it has also substantially improved, to ship coal and agricultural products from China's northeast to its southeastern coastal cities, such as Shanghai, significantly reducing transportation costs.

China this year made drastic improvements to roadways between Rason and a number of areas in Jilin province, the Yanbian Daily reported, but specifically focused on the link between the North Korean special district and Hunchun.

It recently finished construction of a two-lane highway that links the Hunchun border city of 250,000 residents directly with Najin Harbor.

Officials in China also plan to develop Hunchun as a logistics hub, which is expected to significantly increase trade between China and North Korea. 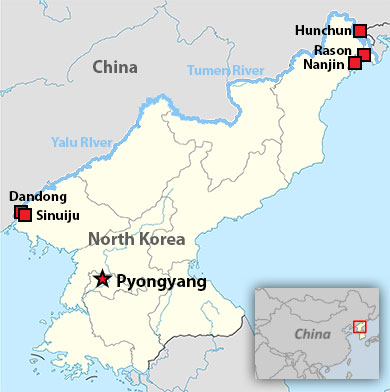 Experts say that China, largely believed to be North Korea’s largest food donor, is shifting away from viewing the reclusive country only as an aid recipient.

Hoare, currently with the University of London’s Centre of Korean Studies, said Rason, which had languished since its founding in 1993, “appears to be enjoying a new lease of life” as a result of the Chinese investment, which was characteristic of a larger trend in relations between the two nations.

“The Chinese position seems to be that North Korea is stable under its new leadership and, no doubt with proper precautions, can be a reliable business partner,” said Hoare, referring to Kim Jong Un’s recent ascendance to power following his father Kim Jong Il’s death in December.

“It may also show that China wishes to move away from the constant provision of aid to North Korea toward a more regular economic partnership.”

Shin Hyun-deok, a professor at the Korea Polytechnic University in Seoul who previously taught Korea-China relations at China’s Shandong University, said that economic cooperation between the two countries has been exaggerated.

“If you look closely at what China has been providing for North Korea, you will not find much … The trade volume between China and North Korea is a lot smaller than we think,” he said, adding that China’s close relationship with the North was solely based on “diplomatic reasons.”

But he acknowledged that China clearly sees North Korea in a changing economic role.

“China thinks North Korea will go through changes very soon. The question is if the speed of change will remain at the current pace or will accelerate.”