An armed assault on a Myanmar border guard station leaves a gaping hole in the wall of one building and a blown-out door on another structure in Maungdaw township, western Myanmar's Rakhine state, near the border with Bangladesh, Jan. 24, 2019.
Photo courtesy of Myanmar's Ministry of Information

Members of an unidentified armed group on the Bangladesh side of the border separating the country from Myanmar injured three people in a shooting on Thursday at a border guard outpost in conflict-ridden Rakhine state, a spokesman for the military’s Western Command and a township official said.

The unidentified armed group inside Bangladeshi territory targeted the outpost near demarcation marker No. 41 in Maungdaw township, said Colonel Win Zaw Oo of the Western Command, which oversees operations in Rakhine state.

“We have small outposts near the border,” he told RFA’s Myanmar Service. “They fired shots at one of them. It was near demarcation marker No. 41 along the Myanmar-Bangladesh border. They shot from Bangladesh with small firearms.”

The Myanmar Army regards the shooters as a “terrorist group,” but cannot track them down since they are on the other side of the border, he said.

“The enemy fired about 20 shots, and some blasts from heavy weapons hit two of our service members and a member of the Military Engineer Corps, causing minor injuries,” Maungdaw township administrator Myint Khine said.

The gunmen attacked the Myanmar border guard outpost from three areas in Bangladesh, he said.

“We learned that our outpost was under attack from three different positions — two from the border fence and one from a hill,” Myint Khine said.

“We learned this morning that an investigation of the incident is being carried out, but we don’t know anything yet,” he said, adding that the shooters reportedly fired heavy weapons from across the border.

Myanmar state media and the Ministry of Information reported that the outpost was hit by four artillery shells from grenade launchers and about 200 rounds of small-arms fire at 7:44 a.m. local time, injuring the two policemen and a worker repairing a fence.

Myanmar’s Ministry of Foreign Affairs said it summoned Manjurul Karim Khan Chowdhury, Bangladesh’s ambassador to the country, and informed him about the incident.

Myanmar officials gave him a diplomatic note asking for measures to stop such attacks so that they would not affect relations between the two nations, the ministry said.

Residents of Wai Lar Taung village, the community nearest to the area where the attack occurred, reported hearing gunfire.

“It has become a routine, and people are living in fear whenever such incidents occur, feeling nervous because they have to depend on others for security,” said village administrator Kan Hla Maung. “Some have gone into hiding, and some have fled from their homes.”

“I told them not to be afraid because we have the Tatmadaw [Myanmar military] in the area,” he added.

Kan Hla Maung said similar shootings had occurred in the past, and that Myanmar border officials had complained to Bangladeshi officials and discussed the incidents with them during bilateral meetings.

“We haven’t done anything about the latest incident, said Win Zaw Oo of the Western Command. “In the past, we sent complaint letters through the Border Guard Force to Bangladesh, so [this time], we’ll do the same.”

Northern Rakhine has been rocked by an increase in hostilities between Myanmar forces and the Arakan Army (AA), an ethnic insurgent group fighting for greater autonomy in Rakhine state, since late November 2018.

The government instructed the military to “crush” the AA after ethnic fighters carried out deadly coordinated attacks on four police outposts in Buthidaung township in early January.

The government has also accused the AA of having links to the Arakan Rohingya Salvation Army (ARSA), a Rohingya Muslim militant group whose lethal attacks on police outposts in northern Rakhine in 2017 triggered a brutal crackdown that left thousands dead and forced more than 725,000 mostly Rohingya to flee to safety to Bangladesh.

The AA has denied having any ties to ARSA.

However, Myanmar’s General Administration Department (GAD), the civil service body that staffs regional and state-level governments in the country, said ARSA was responsible for the shooting attack near border demarcation marker No. 41, the online journal The Irrawaddy reported.

Hla Tun Tin, an official with the GAD’s Kyein Chaung office in northern Maungdaw township, told the publication that about 40 ARSA fighters crossed into Myanmar from Bangladesh and tried to seize the border guard outpost.

Other recent assaults targeting border guards in northern Rakhine have involved both the AA and ARSA.

Myanmar border guard forces clashed with the AA on Jan. 15 near demarcation marker No. 56, and a landmine explosion injured two guards, according to a statement issued by military chief Senior General Min Aung Hlaing’s office.

ARSA has not issued any statements about attacks it has been accused of carrying out in January, and the AA has not claimed responsibility for Thursday’s armed assault on the border guard outpost. 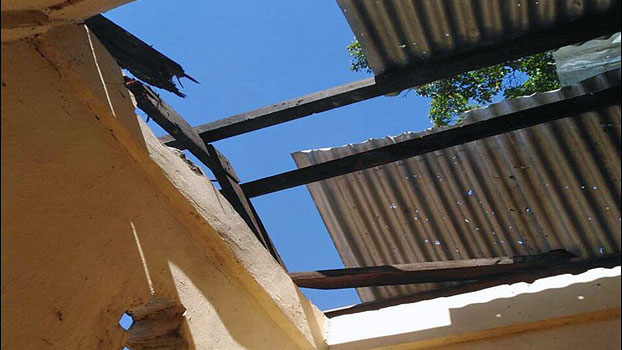 The roof of a Myanmar border guard station is damaged following an armed assault in Maungdaw township, western Myanmar's Rakhine state, near the border with Bangladesh, Jan. 24, 2019. Credit: Photo courtesy of Myanmar's Ministry of Information

Sun Guoxiang, the Chinese Foreign Ministry’s special envoy for Asian affairs, denounced the AA’s early January attack on border guard posts in Rakhine as “an unacceptable, irresponsible act,” during a meeting with Min Aung Hlaing on Tuesday in the capital Naypyidaw, according to a statement issued by the military chief’s office.

The two also discussed measures taken by the government and Myanmar military and China’s assistance to achieve permanent peace in Myanmar and China’s support for a unilateral four-month cease-fire that the military declared in several states — except for Rakhine state — in December, the statement said.

“We have nothing to comment on China’s denunciation of the AA’s attacks, and there's been no pressure on us,” said AA spokesman Khine Thukha.

“In general, there have been some improvements in the peace process, such as a trip by the commission to Chiang Mai [Thailand] and China, and yesterday’s meeting with the Chinese representative and the commission chairman,” said commission member Aung Soe. “We have some progress, and I am pleased with it.”

In September 2018, Sun Guoxiang arranged and mediated the first-ever meeting between the Union Peace Commission with representatives from three ethnic armies, including the AA, to try to reach a point where they can hold political talks to settle ethnic conflict and war.

China has said that it firmly opposes any attempt to undermine peace and stability in areas along its border with Myanmar and any act deliberately obstructing Myanmar’s peace process, though the country is believed by security experts to be the direct or indirect source of weapons for many of the ethnic armies fighting the Myanmar government.

The AA, whose headquarters are in the town of Laiza in northern Myanmar's Kachin state, is part of a coalition of four ethnic armies known as the Northern Alliance that have engaged in battles with government forces near the Myanmar-China border in recent years.

China also has a greater incentive in helping to bring about peace in Myanmar.

“Myanmar’s peace process is important for China to achieve its One Belt, One Road projects,” said political analyst and writer Than Soe Naing, referring to the Chinese government’s massive undertaking to build roads, railway lines, and ports, and oil and gas pipelines across the Asian continent, including Myanmar.

“It seems that China is very disappointed about the AA’s attacks on police outposts,” he said, adding that Sun Guoxiang met with AA leaders a few weeks ago, though what they discussed wasn’t publicly reported.

“I think he would have asked AA not to carry out this kind of attack again,” Than Soe Naing said. “The AA seems to be at a crossroads and must decide which path to choose.”

Neither the Northern Alliance groups nor the Myanmar military can ignore China’s opinions, he added.

Ending decades-long wars between the national military and ethnic armed organizations is a key priority of State Counselor Aung San Suu Kyi, whose government has been holding periodic negotiations with army officials and rebel leaders since it came to power in 2016.

Ten ethnic armies have signed the government’s nationwide cease-fire agreement (NCA), but 11 others, including the AA, have not.

The AA is one of seven ethnic armed groups belonging to the Federal Political Negotiation and Consultative Committee (FPNCC) which has proposed a confederate system in Myanmar that allows ethnic organizations to maintain their own armed forces — a move that the Myanmar military strongly opposes.

“If the AA decides to create an independent Republic of Rakhine [confederation], not only the AA, but also the Rakhine people will face negative repercussions,” Than Soe Naing said without elaborating.