Dinh Quang Tuyen stands with his bicycle after being attacked in Ho Chi Minh City, May 19, 2015.

A group of plainclothes police officers beat an outspoken anti-China activist in Vietnam’s economic capital Ho Chi Minh City on Tuesday, sending him to the hospital with a broken nose, he said, in the latest attack on a public campaigner in weeks.

Dinh Quang Tuyen, who has participated in several anti-China rallies expressing anger over Beijing’s claims to the disputed Paracel islands, told RFA’s Vietnamese Service that he was targeted in an alleyway around 100 meters (330 feet) from his home when he left for his morning bicycle exercise.

“I saw Lt. Col. Huy sitting in the corner of a small makeshift shop when I left the house today, so instead of riding my bike, I walked toward a nearby school out of caution,” Tuyen said, noting that his home had been under police surveillance for the past four months.

“I then got on my bike and rode away then turned left, but there was hardly anybody around, so I stopped. I felt that something was wrong, so I turned around,” he said.

“Just then, two young men wearing surgical masks came up to me and asked where I was going, and suddenly punched me in the face [breaking my nose]. Blood ran all over my shirt. Bystanders looked terrified.”

Tuyen said he was later admitted to a nearby hospital where doctors told him they would perform surgery on his nose when the swelling had subsided.

An outspoken campaigner, Tuyen initiated the “Nuoc Nha Khong Ban,” or “Don’t Sell Our Country,” movement to protest what he and other activists call China’s aggression in the disputed South China Sea and Hanoi’s reluctance to take a stronger stand against its northern neighbor.

Tuyen told RFA that in addition to monitoring him, police have broken into his home several times over the last four months when he was away.

Tuesday’s attack was the latest of several in recent weeks against public campaigners in the one-party communist nation, where dissent is not tolerated.

Last week, anti-China activist Nguyen Chi Tuyen told RFA he was attacked by thugs in the capital Hanoi after driving his son to elementary school, requiring doctors to give him six stitches on his head and a CT scan to determine whether he had suffered a brain injury.

In addition to his activism over territorial disputes in the South China Sea, Nguyen Chi Tuyen had also campaigned to commemorate Vietnamese soldiers who died during Vietnam’s brief border war with China in 1979 and to promote environmental causes such as recycling.

At the end of April, prominent blogger Trinh Anh Tuan was savagely attacked with bricks by a trio of plainclothes policemen he said were among a group of men who have been observing his home for the past month.

Tuan, who operates a website calling for transparency from local officials with regards to a controversial tree removal plan in the city, said he had been harassed by plainclothes authorities before in March 2014, though “the injuries were not as severe as this time.”

He was also among 50 people detained and beaten by police on May 15 last year after taking part in an anti-China protest sparked by territorial tensions in the South China Sea. 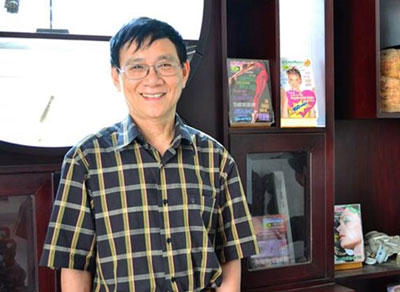 Chi told RFA that security officers at the city’s Tan Son Nhat airport confiscated his passport at around midnight on May 18 and banned him from leaving the country, without citing any reasons.

“My daughter [who lives in the U.S.] purchased tickets for me and my wife to stay with her for three months during the summer,” he said.

Chi said he had only once attended a conference in the U.S. when he was invited by the University of Massachusetts several years ago, and expressed confusion over why authorities would want to prevent him from visiting his daughter there.

He vowed to appeal the decision “to regain my rights as a free citizen.”

Chi is one of the founders of the Bauxite Vietnam website, which publishes articles critical of Chinese-run bauxite mines in Vietnam and government policies in the industry.

In October last year, Chi told RFA that heavy rains in the country’s central highlands present a serious risk of causing overflows of waste reservoirs at bauxite mining plants and called on government officials, who had played down any cause for concern over the issue, to review their stance.

In January 2010, Vietnamese police searched Chi’s Hanoi home, confiscated his computer and hauled him in for a full-day of questioning related to his website, but stopped short of arresting him.

Bauxite mining drew national attention in 2009 when the late war hero Gen. Vo Nguyen Giap urged the government to reconsider it in an open letter which sparked an onslaught of opposition to the industry from scientists, activists, and legislators.

Chi is the son of Nguyen Dong Chi, a scholar who was recently praised for his contribution to Vietnamese culture in recognition of his 100th birthday.

China is very rich and powerful .It will do anything it wants.I think Vietnamese can't do nothing about China influence in Vietnam .

I was planning to come back to Vietnam to help rebuild the nation especially in contributing aerospace technologies but I have change my mind now after seeing these government thugs harming these peaceful protesters.

FREEDOM OF THE PRESS

This is one thing Vietnam government should be shame of for beating its citizen for anti-china activities in S. China Sear. You think beating your own citizen who against China activities in the South is to empress or in favor of the Chinese government? Chinese government doesn’t buy that. All they do are claiming more territories so they can maneuver their military when come to war. Soon or later PLA Military Hardware will be rolling over Vietnam territory.