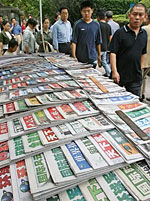 Zhu's tenure encompassed the early years of the Deng Xiaoping era of economic reform, when political change seemed a real possibility in the wake of the ravages of the Cultural Revolution (1966-1976). He rejected a revolutionary mentality in dealing with the problems of today's China.

"Revolution and uprising should not be the means to be used to resolve the contradictions," he told RFA reporter Ding Xiao. "China as a nation cannot afford such turmoil."

"We share the same view that peace and reconciliation, and progressive reforms, are needed to dissolve those contradictions, and to achieve national unity and a harmonious society," he added.

Zhu spoke shortly after being invited to act as senior adviser to the China Reconciliation Think-Tank, a non-government organization set up last year by social science scholars Fan Yafeng and Zhang Boshu of the China Academy of Social Sciences (CASS).

Also among the co-founders are civil rights activists Teng Biao, doctor in law at the China University of Political Science and Law, and Zhongshan University professor Ai Xiaoming. Both were involved in a landmark attempt by villagers in Guangdong's Taishi village to have their elected leader removed amid allegations of corruption surrounding a land transaction.

According to the group's Web site, it is built on values of openness, reconciliation, compromise, and tolerance, with a view to lowering levels of fear in Chinese society around democratic politics, and to promote a decrease in social upheavals caused by social conflict.

Asked about his work with the think tank, Zhu said the group were reformers rather than rebels.

"This is the direction of thinking, but how to execute it needs a lot of study," he said.

"I believe that reconciliation is better than revolution, which may lead to a total destruction. I have left the political arena for many years, and I am approaching 80 years old. All I mean is to agree with the idea of young people who want to use reconciliatory means to resolve today's social contradictions. We are not revolutionaries. We are reformers, not rebels," Zhu said.

His remarks came as Tibetans continued to give eyewitness accounts and their personal opinions of the recent violence in the Tibetan capital, Lhasa, and in Tibetan regions of Gansu, Qinghai, and Sichuan provinces.

"In our area, the Chinese crackdown and restrictions on monks and Tibetan youths and students have been shockingly rigid and ruthless," a Tibetan-American youth who was in Lhasa during the protests told RFA's Tibetan service.

"Monks are being ostracized, and the police look on them as objects of hatred. The situation is extremely tense. All Tibetan monks and students, regardless of their participation or non-involvement in the protests, are being treated as suspects," he told a panel discussion on the recent unrest.

A young Tibetan woman now in Australia said she supported the uprising, in spite of witnessing shootings and deaths among Tibetans and injuries among Han Chinese in the Tibetan capital.

"I thought that this was the right thing to do," she said. "I participated in the protests and was among the protesters in the area of Ramoche monastery for about two hours. I knew that the protests were expressions of Tibetan despair over Chinese oppression in our own country."

But a young Tibetan man in Qinghai province said he disapproved of the rioting which broke out among anti-Chinese protesters in Lhasa.

"It is my own opinion that you might want independence, or self-rule; you might demonstrate or express your ideas, but that doesn't justify looting or arson," he said. "That is not necessary."

He called for greater autonomy for Tibetans within China, including greater respect for the region's unique culture, including the compulsory use of the Tibetan language.