Photo courtesy of a citizen journalist

The Lao government wants its national airline to resume flights to a small airport in the country’s southeastern Attapeu province, though operations were suspended a year ago because of low passenger numbers and mounting debt, a government official who manages the nation's airports said.

Lao Airlines had begun operating regularly scheduled service to Attapeu International Airport near the borders of Vietnam and Cambodia twice a week from the capital Vientiane via Pakse in April 2016.

At first, the number of passengers rose to 30 from seven per flight after Lao Airlines increased the number of flights to the airport to three per week from two per week, said Somboun Daosawan, a manager in charge of airports throughout the country at the Ministry of Public Works and Transport.

But the airline suspended the flights several months later because few, if any, passengers were flying into or out of the area, he said. The last commercial flight to the airport landed on Oct. 26, 2016.

“The reason [for the suspension] is because the number of passengers had fallen sharply, and Lao Airlines was unable to shoulder the debt,” he said.

Now that the government wants Lao Airlines to resume service at the airport, it has asked Vientiene to subsidize its debt, Somboun said.

Lao Airlines, however, does not want to restart the flights because they are not profitable, he said.

The airport’s construction four years ago was surrounded by controversy from the start. Doan Nguyen Duc, chairman of the Vietnamese conglomerate Hoang Anh Gai Lai Joint Stock Company, repotedly demanded that the airport be built so he could fly his private jet directly to Attapeu province where his company has a field office.

The company invested in the building of the U.S. $36 million airport which includes a 4,300 square-meter (46,300 square-foot) terminal capable of handling 300 passengers a day and a 1,850-meter (6,100-foot) runway for ATR-72 and Fokker aircraft, according to a June 2015 article in Vietnam News, an English-language daily published by state-run Vietnam News Agency.

“The airport is a key socioeconomic project in southern Laos that also carries political significance for both the host nation and Vietnam,” the article said.

“The idea for the construction in 2013 was not from Lao Airlines, but was the demand of a former Politburo leader who has a conflict of interest with Huang Anh Gai Lai and has abused his power to personally build it,” said a source close to the Vietnamese company. 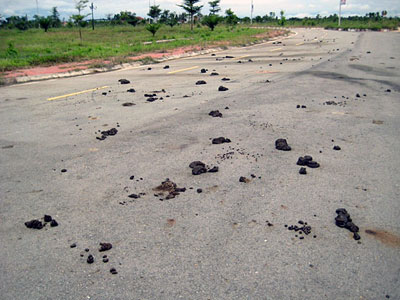 Piles of buffalo manure dot the road to the entrance of Attapeu International Airport in southeastern Laos' Attapeu province, June 2017. Credit: citizen journalist
For the people?

Headquartered in Pleiku, Vietnam, Hoang Anh Gia Lai is a diversified company with interests in property development and rubber, and it owns a soccer club. It has invested heavily in Laos, Cambodia, and Thailand.

“Public transportation between airport and town center is not available,” the source said.

Somboun, however, denied the accusation, saying that the Lao government built the airport for the public.

“It is not true when people say the government used the budget to build the airport to service the special flights of Hoang Anh Gai Lai,” he said. “With a loan, the government built it for all Lao people to use.”

Nearly a year after Lao airlines stopped offering flights and the airport fell into disuse, local villagers use the grounds to let their buffalo graze.

“In addition, the areas surrounding the terminal building are covered with grass, and the entrance to the airport is where the villagers’ buffalo drop their dung,” said the source close to Hoang Anh Gia Lai.

At the time of the project's inauguration by former Lao President Choummaly Sayasone and former Vietnamese President Truong Tan Sang, Vietnam News hailed the airport as “a symbol of thriving Vietnamese-Lao relations.”

Vietnam is one of Laos’ largest investors. Earlier this year, China’s state-run Xinhua News Agency reported that Vietnamese enterprises had invested about U.S. $3.7 billion in more than 400 projects in Laos.

What Laos needs most urgently now is to get rid of communism in every walk of life and start anew before it's too late.