Dozens of newly built villas line a street as concrete skeletons of what may become hotels or casinos stand half-finished nearby. A new paved roadway allows access to more than a dozen boxy two-story buildings still under construction opposite plots of cleared land streaked with muddy tire tracks.

Farther along the road, about 30 warehouse-type buildings with blue roofs stand at attention beside a river, while in the distance villagers’ small homes dot lush green fields.

The Chinese-backed U.S. $15 billion real estate mega-project along the Thaungyin River in southeastern Myanmar’s Kayin state has been dubbed Shwe Kokko “Chinatown” by locals. It sits about 12 miles from the state capital Myawaddy and a 10-minute drive to the Thai town of Mae Sot.

Shwe Kokko is the latest manifestation of China’s growing presence in the Southeast Asian country through its Belt and Road Initiative to connect the country with the rest of the region and beyond. And it's moving ahead at full throttle despite heavy criticism from ethnic Karen locals who object to what they see as Chinese encroachment upon their land, livelihoods, and culture.

China’s state-owned Jilin Yatai Group Company Ltd., together with a local warlord, is spearheading the construction of the huge international-standard city in the Shwe Kokko area near the Myanmar-Thai border as a playground for Chinese tourists.

In Myanmar, the Jilin Yatai Group is conducting its operations under the name Myanmar Yatai International Trading Company Ltd.

A former garrison town of the Karen National Liberation Army, Shwe Kokko is controlled by Colonel Saw Chit Thu, chief of the Karen Border Guard Force (BGF), which is recognized by the Myanmar government and affiliated with the Myanmar military.

The multibillion-dollar project that will reportedly include luxury villas, an entertainment complex, supermarkets, department stores, a police station, an airport, cargo depots, a 1,200-room hotel, casinos, an industrial zone, and a wildlife sanctuary is scheduled for completion in 2027.

“They proposed to us that after they finished their new city project in our area, it is gradually going to be for tourism or for their citizens to come and visit,” said Karen BFG official Saw Min Min Oo, who is also the director of Chit Lin Myaing. 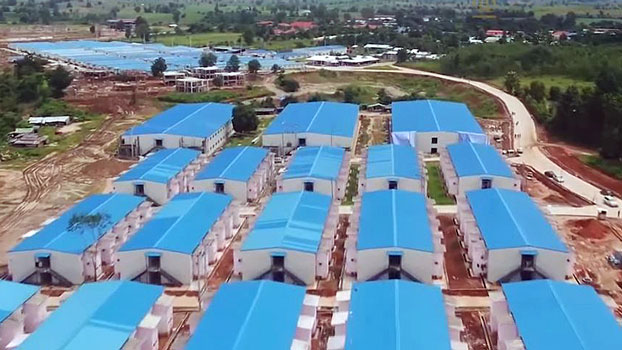 But ethnic Karens who inhabit the area that used to be open countryside say they are getting a raw deal at the expense of those who will profit from the project, and fear being inundated by waves of Chinese settlers.

“It’s because this city is being built against the wishes of the local people — the Karen people,” said Mann Kyaw Nyein, general secretary of the Karen National Party, a political party representing the interest of the Karen people in Kayin state. “There are other indigenous people as well in this region.”

“There are many things that will follow this and will have a cultural impact,” he said. “And then, there’s gambling. Originally, these areas did not have gambling. When there’s gambling, our lifestyles change, and especially our moral behavior can become corrupt. I must say we are worried.”

Locals have also expressed dismay over compensation paid for land appropriated for the new city project, according to local media reports.

One Shwe Kokko village resident told the online version of a Yangon-based news magazine that company representatives did not meet residents before work began. There had been meetings with only the BGF, which paid them only U.S. $1,600 an acre — about, $3,200 less than the amount they sought.

As the main investor in the project, Myanmar Yatai had requested that it lead the construction operations, Saw Min Min Oo said.

“Local people are not too skillful, and there had been delays in the construction,” he said.

“They [the company] guaranteed that when the construction work and the buildings were finished, local people would get more business,” he said. “Because of that, we gave them permission.”

Among those concerned about growing Chinese influence in Karen state is Nan Khin Htway Myint, the state's chief minister, who says the government is closely watching the development of the project.

“With regard to the housing project, in Myawaddy and Shwe Kokko, the population is increasing day by day,” she told RFA’s Myanmar Service. “Because of that, we must have a housing project. It’s not a good thing that the number of Chinese people is increasing during my time [in office]. I am more worried than others.”

But because the Shwe Kokko new city project is being implemented with permission from the Myanmar Investment Commission, a government-appointed body responsible for verifying and approving investment proposals, Chit Lin Myaing says that local residents need not worry about Chinese dominance in the area.

“Once there’s Shwe Kokko City at this place, all the officials will come and stay, and it will be a city which is truly under the administration of our country,” Saw Min Min Oo said.

Reported by Kyaw Lwin Oo and Aung Theinkha for RFA’s Myanmar Service. Translated by Than Than Win. Written in English by Roseanne Gerin.