Burmese authorities overrun camps of anti-mine activists who refused an order to leave the site.
2012-11-28
Tweet

Buddhist monks receive treatment for burns at a hospital in Monywa, northern Burma, after a police crackdown on the copper mine protesters, Nov. 29, 2012.
AFP

They moved in around 3:00 a.m. local time after the protesters, who had held demonstrations around the Letpadaung Copper Mine in Sagaing division’s Salingyi township since Nov. 18, defied warnings by the authorities to leave the site.

At least 20 monks were admitted to the hospital in nearby Monywa town, most of them injured by a type of chemical they said was sprayed on the protesters. One monk who had the lower part of his body burned has been ferried to a larger hospital in Mandalay, the second biggest city after Rangoon.

"After using water cannons, they started using a type of chemical which was sprayed on us. It burned the monks' robes and they sustained burn injuries on their bodies," Wi Thu Ta, a monk from Mandalay who had joined the protests, told RFA's Burmese service.

"We just prayed and the monks and the villagers who protested did not resist but the riot police beat us up. Some were severely beaten," he said. "I denounce this action by the government."

The raid came as opposition leader Aung San Suu Kyi headed to the mine site to meet the protesters. At the height of the protest, there were at least 2,000 protesters at six camps they had set up.

The villagers, backed by hundreds of monks and student leaders, have accused the mine developers of illegally confiscating more than 3,200 hectares (8,000 acres) of farmland without providing adequate compensation.

Authorities reiterated their warning three times on Wednesday evening, telling protesters to vacate the premises by midnight, according to student leader Thaung Htike. But when they again refused to leave, riot police early Thursday morning raided two of six camps set up by the protesters at the site.

"They first lobbed teargas canisters into our camp—five of them altogether—and also fired teargas towards the road leading back to our village,” Thaung Htike told RFA’s Burmese service.

“When we retreated, the riot police raided the camp in force.”

Thaung Htike said that protesters had to retreat from two camps, one of which was located in front of the offices of Wan Bao Co.—a subsidiary of state-owned Chinese arms manufacturer North China Industries Corp. (Norinco), which jointly owns the project with the Burmese military’s Union of Myanmar Economic Holding Ltd.

“Both were destroyed by the security forces,” he said, adding that “several” people, including monks, were injured in the melee. 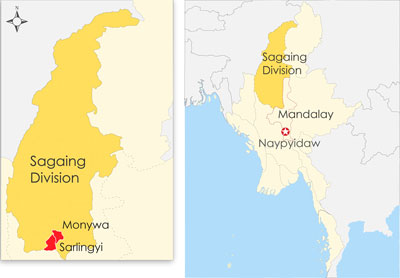 One protester, identified as Aung Myint Htway, a peanut farmer, had his face and body covered with black spots where his skin was burned, the Associated Press reported.

"They fired black balls that exploded into fire sparks. They shot about six times. People ran away and they followed us," he said, still writhing hours later from pain. "It's very hot."

"This is unacceptable," said Ottama Thara, a 25-year-old monk who was at the protest. "This kind of violence should not happen under a government that says it is committed to democratic reforms."

The raid followed an unsuccessful attempt by police to take down part of the encampment earlier on Wednesday, according to Thaung Htike.

He said that around 3:00 p.m. on Wednesday afternoon more than 100 police officers had attempted to remove a smaller camp of about 30 monks in a bid to reach the main camp outside of the Wan Bao offices.

“These police were holding weapons including guns and batons. They want to get the main protest camp … so they can continue with construction at the site. They can’t mine the copper because this main camp is there …. so they are preparing to occupy the weakest camp,” he said at the time.

“The protesters will not give up until the authorities and people from Wen Bao Co. stop the project.”

Thaung Htike said that he was unsure of how many members of the security forces had gathered at the site in total because the majority of them were housed inside of company buildings.

Thwe Thwe Win, a demonstration leader, said protesters had initially been warned to leave the site Tuesday by officials from Wan Bao who threatened “action” by authorities.

“Someone shouted with a loudspeaker from the Wan Bao Co. campus that the Home Minister had warned protesters to vacate their camps near the mine by the end of Tuesday [at 12:00 a.m.],” he told RFA’s Burmese service.

“[They said] if the protesters don’t follow the order, [authorities] will take action according to the current law and according to police procedure.”

Officials who ordered demonstrators to leave the site on Tuesday also said that mining operations had been halted since the protest camps were set up on Nov. 18.

They said that Burma’s parliament had decided to form a committee to investigate the situation at the mine, but could not start its work until it resumes operation.

Thaung Htike said that demonstrators had not been deterred by the threat of arrest and had vowed to continue their fight to scrap the mine project in a peaceful manner, regardless of how authorities reacted to their decision to stay past the deadline.

He said protesters had been bolstered by reports that National League for Democracy (NLD) leader Aung San Suu Kyi planned to visit the area Thursday to hear their grievances and “would continue their efforts until they get what they want.”

Khin San Hlaing, an NLD Member of Parliament, said representatives of her political party had requested to meet with Wen Bao company officials, but had received no response.

Tin Oo, deputy chair of the NLD, said the mine project had lacked transparency since it was authorized by Burma’s former military government. A quasi-civilian government which has enacted sweeping democratic reforms took power last March following historic general elections.

“It wasn’t transparent from the beginning. The military government made an agreement for this project and it was not only non-transparent, but it wasn’t made with the people’s interests in mind,” he said.

“It is getting more difficult to solve this problem because it is now dependent on whether the project will be scrapped or not.”

Khin Maung Swe, leader of the opposition National Democratic Front, called the mine dispute “delicate” and called for a meeting between all interested parties before the issue becomes “more complicated.”

“A solution must be reached by holding discussions between the government, Myanmar Economic Holdings, Wan Bao Co., and the protesters,” he said.

“We also need international help … that is the best way to solve the social suffering of local people.”

Kyaw Min Yu, a member of the 88 Generation Students Group, called on the mine owners and the government to ensure that the project does not restart while the parliamentary committee investigates the dispute.

“Fewer direct meetings and discussions have been held since the dispute began, it seems,” said the political activist better known as “Ko Jimmy.”

“It would be less difficult to solve this problem if all the people who are involved met and discussed the situation.”

China, get out from our land. You and Bangali illegals are the same. Not given any good to our land but to give bad problem to all Burmese. Why the international organizations shut their mouth, by not talking about all these issues. Shame on you all.