Kyaw Myint, chairman of Myanmar's United Democratic Party, was arrested in Yangon on Sept. 29, 2020, as a wanted fugitive.
Video screenshot courtesy of UDP/Facebook

The arrest of an alleged fugitive with a shadowy past who leads an obscure Myanmar political party running the second-largest slate of candidates has sparked intrigue as well as criticism of lax election standards just five weeks before the Southeast Asian nation goes to the polls.

Tuesday’s arrest of Kyaw Myint has brought criticism on the country’s electoral authorities for failing to vet him and his United Democratic Party (UDC), and caused numerous figures to come forward to discredit claims that he played a significant role in negotiating peace in northern Myanmar decades ago.

Kyaw Myint, 69, and also known as Michael Hua Hu and Zahkung Zung Sau, was arrested by police at his home in Yangon as a wanted fugitive for his escape from a Mandalay prison in the late 1990s where he was serving a 10-year sentence for violating business laws, said the President’s Office.

President’s Office spokesman Zaw Htay told reporters on Wednesday that authorities had detained Kyaw Myint and that police were investigating allegations against him. Kyaw Myint faces escape from custody charges that would add two years to his original jail term.

A recent report by The Irrawaddy, an online news website, said Kyaw Myint was linked to alleged money laundering and was a senior member of an ethnic rebel group in the 1990s involved in the drug trade, later giving information about the narcotics business to the U.S. Drug Enforcement Administration.

The Irrawaddy said he has strongly denied the drug and money-laundering allegations. RFA has been unable to independently verify the reports.

Kyaw Myint reportedly received asylum from both the U.S. and Canada and lived in New Jersey and Vancouver, respectively, before returning to Myanmar in 2012.

While living abroad, he set up the UDP in 2010 and recruited politicians inside Myanmar to mount unsuccessful runs in the 2010 and 2015 general elections.

The party is known in Myanmar as the Rose Party for its red rose logo and is running on a platform that it will bring a better life for citizens and development to Myanmar within five years.

We have not been affected yet’

For the Nov. 8 elections, 1,131 UDP candidates are vying for seats in both houses of the national parliament and in state and regional legislatures — two more that the number of candidates fielded by the main opposition Union Solidarity and Development Party (USDP), and only a dozen less than the number put forward by the ruling National League for Democracy (NLD).

Observers, meanwhile, have criticized the Union Election Commission (UEC), which oversees Myanmar’s elections and vets candidates, for overlooking Kyaw Myint’s past and allowing him to set up the UDP.

“The arrest of Kyaw Myint does not mean his party will be disbanded, but [election officials] may declare it illegal under the Election Law after they have investigated the finances and the activities of the party,” said Yangon-based legal analyst Kyee Myint.

“If the party is dissolved, its candidates can remain in the election race as independents because the UEC has already approved them,” he said.

“As for Kyaw Myint, the statute of limitations for his alleged crimes is still active,” Kyee Myint added.

Some UDP candidates say the arrest has not stopped their campaigning in the run-up to the Nov. 8 elections.

“I honestly have to say that I know nothing about that,” said Gelnis, a party candidate from electoral district No. 1 in Waingmaw township in Kachin state.

“As of today, we are still working on campaigning for the party. We have not been affected yet,” he said. 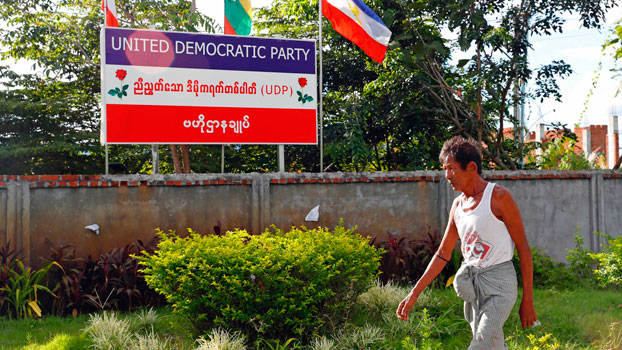 A man walks past a billboard of the United Democratic Party outside the party's headquarters in Myanmar's capital Naypyidaw, Sept. 30, 2020. Credit: Associated Press

Tun Aung, a UDP candidate vying for the Yangon regional parliament seat for Yangon electoral district No. 11, said Kyaw Myint should be indicted if the authorities prove that he is a fugitive.

“He will have to pay the price if he actually escaped from prison,” he told RFA. “No one would pardon the fact that he had not completed a prison sentence.”

The arrest and possible conviction would tarnish the reputation of the UDP, he said.

“We will have to adjust our campaign depending on the outcome,” Tun Aung said.

Two other UDP candidates from Mohnyin township in Kachin state and Pabedan Township in Yangon region told RFA that they were instructed not to comment on the party chairman.

An official UDP biography of Kyaw Myint says the party chairman is a member of the Lachik ethnic group, a subgroup of the Kachins of northern Myanmar. He got involved in politics in 1967 when he was 16 years old under the leadership of Major Kyaw Zaw of the Burma Communist Party (BCP), which was active in northern Myanmar.

The biography also said Kyaw Myint worked closely with members of the Thirty Comrades, the mainspring of Myanmar’s modern army which agitated and fought against colonial ruler Britain. The group was led by General Aung San, a BCP founding member who became the country’s independence hero and was the father of current Myanmar leader Aung San Suu Kyi.

On Sept. 26, Kyaw Myint posted some information on his background on the UDP’s Facebook page, saying that he served military duty in Wa state, now an autonomous region within Shan state, and brokered a peace deal with a military-led government in 1989.

But several individuals and media accounts have rejected the UDP chief’s version of events.

“Kyaw Myint’s claims are not relevant to Myanmar’s historic politics. We never knew him,” she told RFA. “Besides, there are remnants of our BCP in the [present-day] United Wa State Army.”

Former BCP member Maung Maung Soe, who is now an analyst of ethnic and military affairs, also disputed Kyaw Myint’s depiction of his past.

“He claimed that he was involved in the Mongko rebellion in March 1989,” he said, referring to a mutiny within the CBP in the Myanmar-China border town of that name.

“Whenever there are rumors about a political party, the party leaders should come forward to publicly clarify them,” he told RFA. “They haven’t done that.”

“If they have information about suspicious activities, then the Union Election Commission should summon them for questioning,” he said. “The election commission is mainly responsible for issue like that [and] should make the final decision.”

RFA could not reach Kyaw Myint for comment on Wednesday, the day after his arrest. A UDP public relations officer said he did not have any information on the matter because he was out of town.

Nearly 7,000 candidates from more than 90 parties, as well as independents, are vying for 1,171 seats in both houses of the national parliament and in state and regional legislatures next month. The multiethnic country of 54 million people goes to the polls every five years.