The Wa: Burma on the Chinese Border 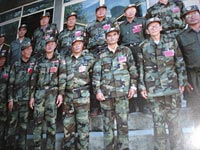 Members of the United Wa State Army (UWSA) in an undated photo. UWSA leader Bao Yu-xiang is the third from left on the bottom row. Photo: RFA/Soe Thinn

In late January 2005, eight members of the United Wa State Army (UWSA) were charged in absentia in U.S. federal court with running one of the world's largest heroin and methamphetamine trafficking networks in the world.

The UWSA controls the Wa special region in a remote area of Burma along the Chinese border. On January 25, the top eight leaders of the UWSA — ; including chairman Bao Yu-xiang, were indicted by the U.S. federal court in New York for drug trafficking.

The Wa are widely believed to depend almost exclusively on poppy and opium production, and the region is said to rank behind only Afghanistan in the amount produced. According to a statement by the U.S. Department of Justice, the Wa region produced more than 180 tonnes of opium in 2004.

Ordinary Wa people were unaware that the Burmese prime minister had been removed. But the Wa soldiers understood, and they knew the government might send more troops after them

The volume is expected to drop sharply since Bao Yu-xiang announced that the 2005 crop would be the last.

Analysts believe Bao Yu-xiang imposed the ban in a bid to strengthen his international legitimacy, but Wa farmers appear to be making the most of the final crop, tilling every available plot of soil as much as they can. 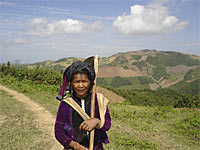 Ethnic Wa live in northeast Burma, on the edge of China. They are one of many minorities who have chafed against Rangoon's military rule Photo: RFA/Soe Thinn

Soe Thinn, RFA's Burmese language service director, traveled to the Wa region on the China-Burma border in November 2004 to report on how the recent ouster of Burmese Prime Minister Khin Nyunt might affect fragile peace deals between Rangoon and the ethnic minorities — ; including the 16,000-strong Wa army of northeastern Burma.

“Ordinary Wa people were unaware that the Burmese prime minister had been removed," he added. "But the Wa soldiers understood and said it is possible they knew the government might send Burmese troops after them."

The ethnic Wa region of Burma “is so Chinese,” Soe Thinn said. “Even though they're in Burma, they use China’s ‘86’ country code for international calls; however, vehicles there have their own Wa registration.”

“All supplies into the region come from China and the road and shop signs are often written in Chinese,” Soe Thinn said. “In the border town of Pan Sang, just over the Chinese border into Burma, nearly everyone spoke Mandarin and Burmese, but they conversed mainly in Mandarin.”

“I was struck by how detached the Wa are from the rest of Burma," Soe Thinn said. "The region has its own power station, owned and operated by Wa leaders, and its own water treatment facility."

The Wa constitute one of many ethnic minorities in Burma that have chafed for decades against military rule from Rangoon. And the extent to which they define themselves as a separate ethnic group reveals the enormous challenge of making peace between the Burman majority and other ethnic groups.